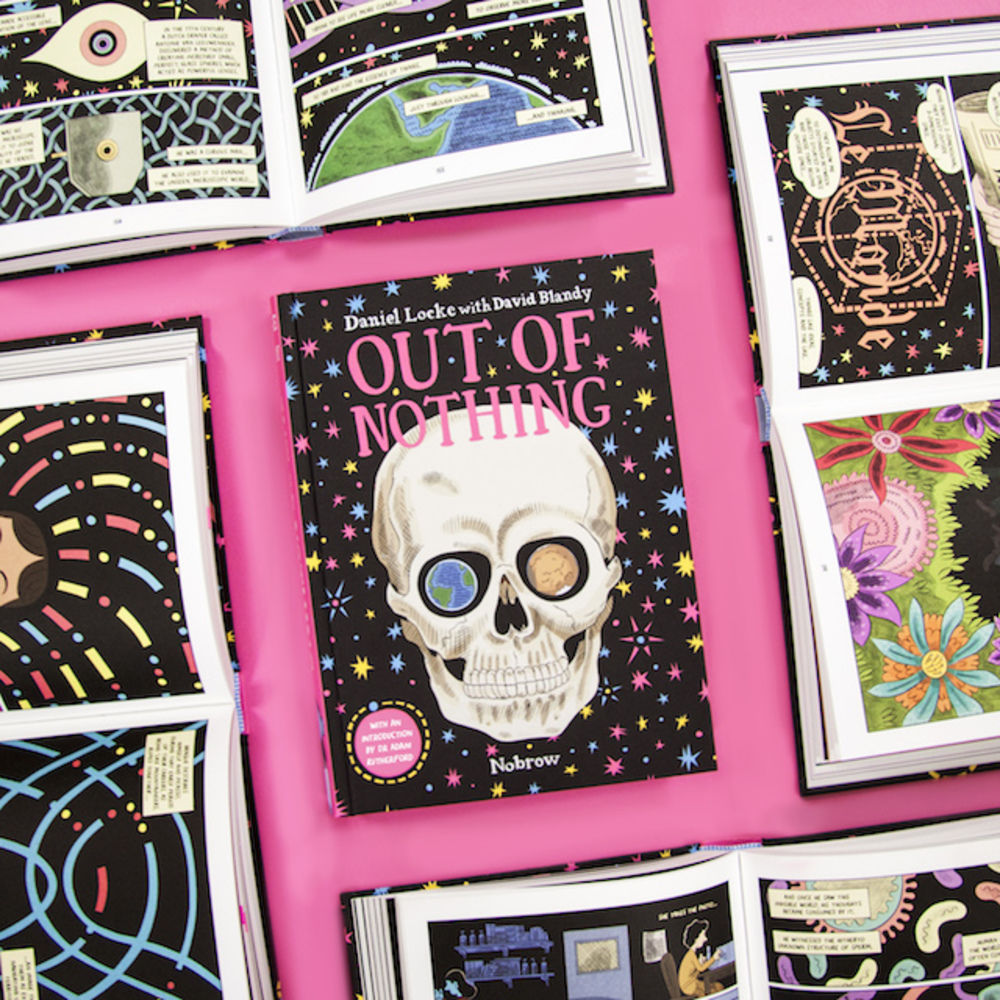 The power of illustration to explain and explore complex ideas is rarely as evident as when it's used in a scientific context; for centuries, skilled image-makers have used the medium to help build our understanding of the world around us, and to translate sophisticated concepts into accessible visual form. Out of Nothing, a new graphic novel by illustrator Daniel Locke with David Blandy published this week by Nobrow, is an excellent demonstration of that power in practice.

Using Locke's charming, colourful and surreal illustrations to draw the reader in, Out of Nothing tells the story of the development of human thought and innovation, connecting the scientific concepts that underpin key inventions throughout mankind's history that have shaped our understanding of the world. Through the eyes of a little girl, the book explores everything from the invention of the written word to Einstein's theory of general relativity and Tim Berners-Lee's invention of the world wide web, and considers where mankind's dreaming mind might take us next. We caught up with Locke to discover how his collaboration with Blandy and Rutherford came about, and how the dreamlike story of Out of Nothing came together...

How did the project come about and what brought you, David Blandy and Dr Adam Rutherford together?
In 2012, the artist and my co-author of Out of Nothing, David Blandy, invited me to work on a project called Helix. Helix was commissioned by the amazing Wellcome Trust to celebrate the 60th anniversary of the discovery of DNA. David and I were teamed with Adam Rutherford and given a studio space in Lighthouse, Brighton, for a number of days to share ideas; Adam introduced us to some incredible things during this period. Helix resulted in a short film and comic, but during the course of making it, we began to realise that some of the ideas we wanted to explore would be best suited to a long form graphic novel.

Once Helix was finished, the creative director of Lighthouse at the time, Honor Harger, asked us what we had planned next. We presented an outline of a huge graphic novel we had been working on that was to be called A Brief History of Knowledge. She was really excited by the idea and offered to help us apply for a second round of funding from Wellcome. Happily that application was successful, and after a name change and a hell of a lot of work, resulted in Out of Nothing.
How did you develop the story and work out the narrative structure?
During our time spent working on Helix, Adam had introduced us to some amazing things and we had identified a number of interesting ideas we wanted to explore in depth. Principal among them was the way in which the concepts of collaboration, teamwork and college have informed and shaped our understanding of the universe. To this central idea I started to add other ideas, dramatic situations and characters, until I had produced a number of individual scenes that would eventually (after a long period of rearranging and reorganising) become the chapters of the finished book.
The book developed organically. I generally produce my comics by simultaneously writing and drawing. The great thing about working collaboratively with David is that I had access to another mind for feedback and new ideas. David is one of my best friends, we went to college together and know each other very well. He is an incredible artist and thinker. He contributed some of the most poetic moments of the book. 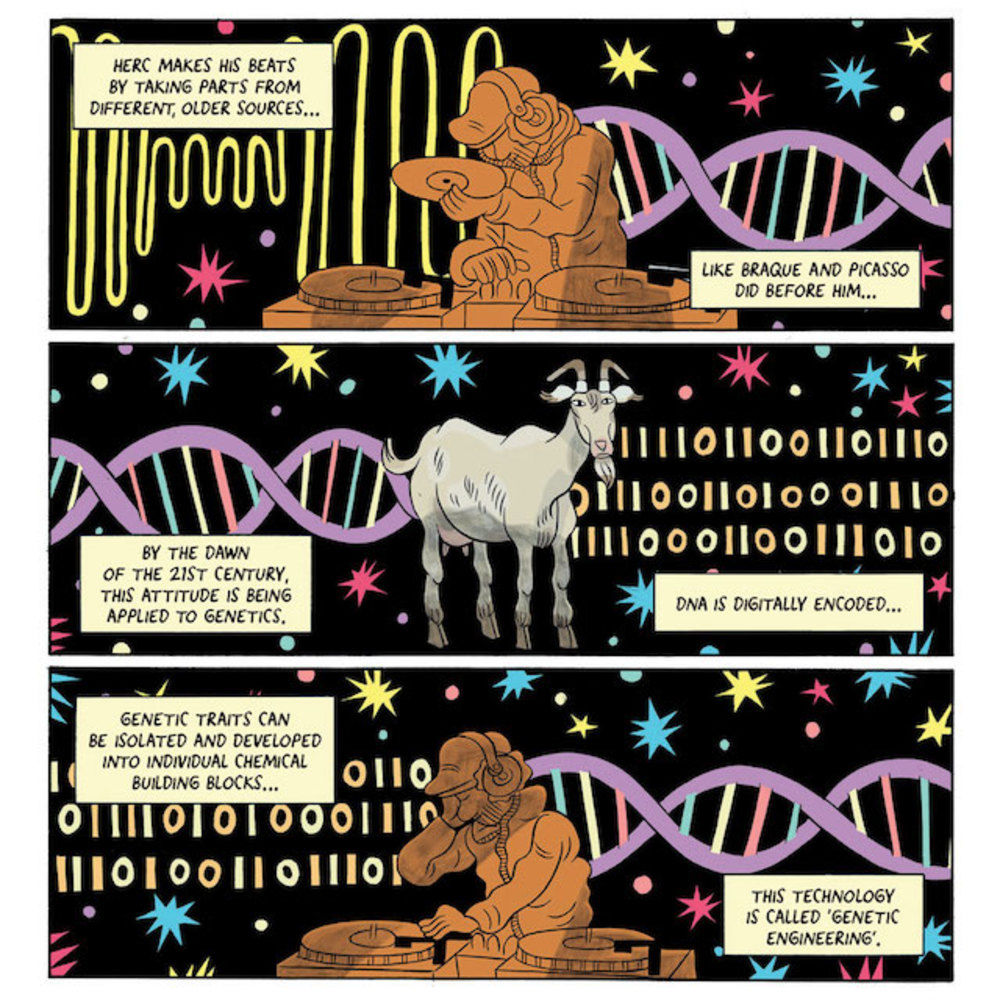 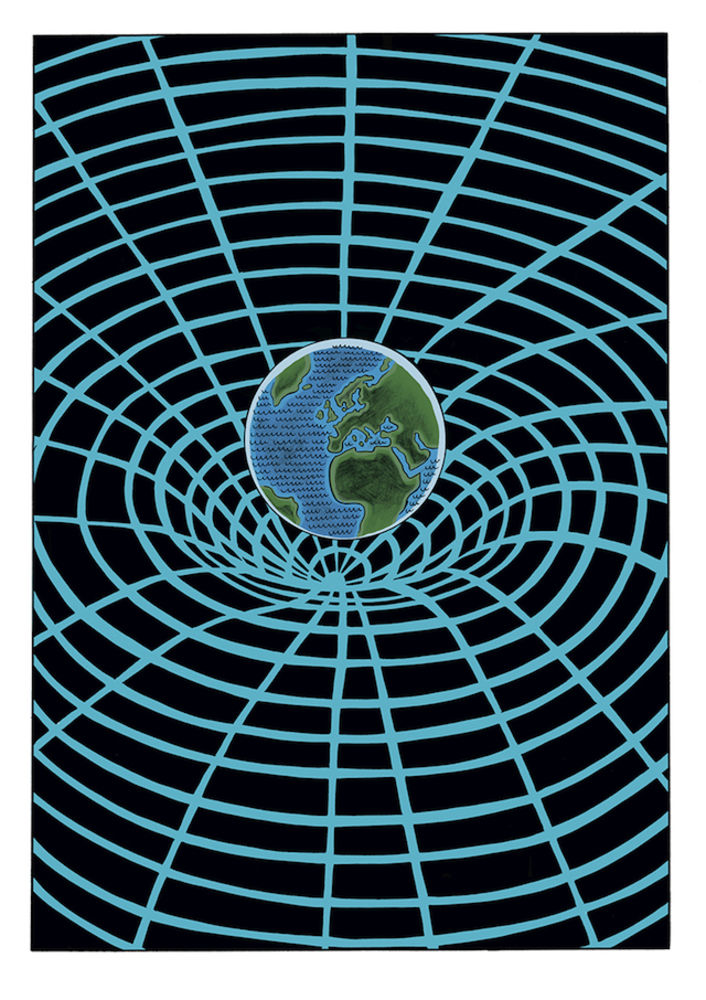 Where there any unexpected challenges during the project and how did you overcome them?
Encountering unexpected challenges and finding ways of over coming them is a pretty accurate description of writing a book, in my experience at least.
You sit down at the drawing table with an idea in your head. You’re not sure where this initial idea will lead, but willing to follow it, you set out on the journey. After some time you realise this not going to be a simple journey. It is not a package holiday but rather an around the world, through desert and jungle, hitchhiking and camel train, adventure.
There are also more practical challenges to face, such as finding funding and a publisher. Out of Nothing produced a huge list of people to thank, and we’ve tried our best to name them in the book itself. We certainly wouldn’t have been able to complete the project if it were not for the belief in it offered by Sam Arthur at Nobrow and his amazing team, editor Hanna Milner and designer Bia Melo (not to mention all those who are now working their socks off getting the book out into the world, thanks Zoe Aubugeau-Williams!). 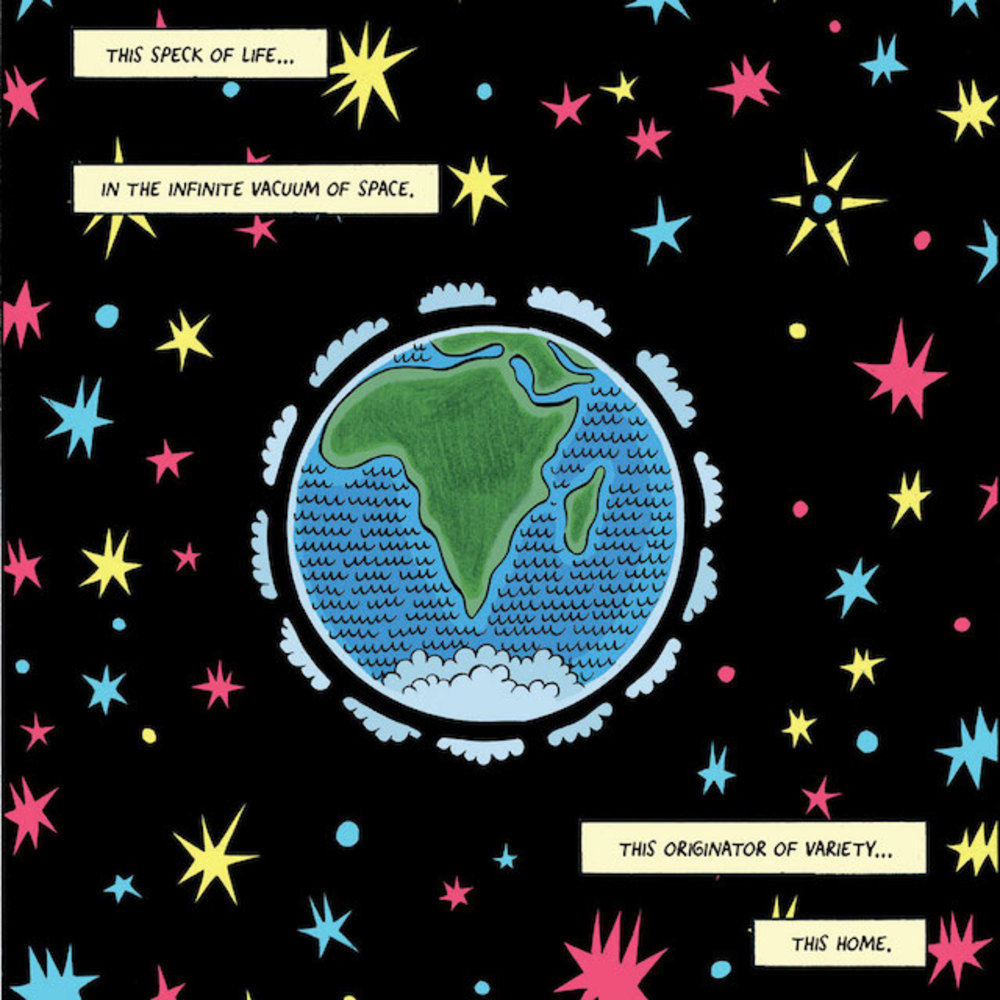 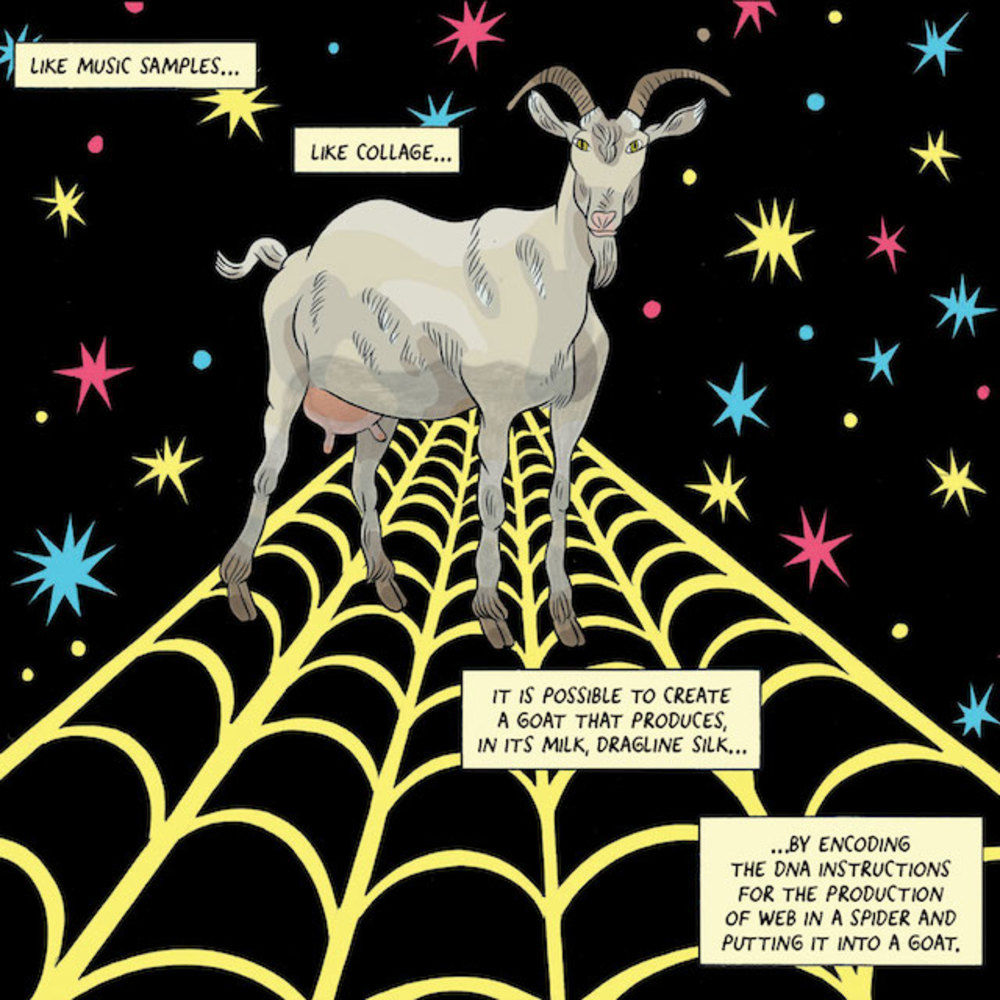 What's the most important or interesting thing you learned along the way?
Artistically, I always knew I wanted to make a big comic book. It’s been a goal of mine since I was little, but Out of Nothing showed me that I enjoy the process, which is reassuring. The project has also taught me that if you have enough belief in a project and a willingness to see it through to the end, it’s possible to make that project into a reality. In this case an idea shared between friends has become a solid book on the shelf.
Finally, Out of Nothing has shown me that I love talking to scientists like Adam Rutherford and working with scientific ideas. For me, there are three big things in the world; art, science and basketball. Out of Nothing was joyous to make since it combine two of my three loves. 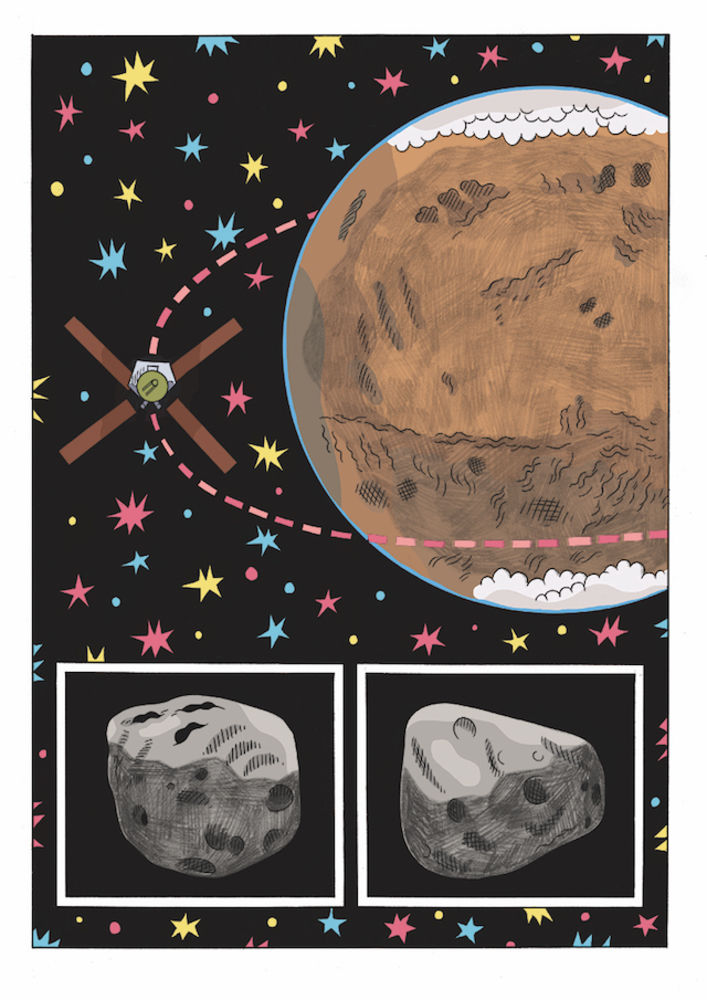 What will you be working on next?
I’m currently working on a new graphic novel with writer Alex Frith and eminent neuroscientists Professors Uta and Chris Frith. This book should be out next year, and covers the careers of the Professors and the current state of neuroscience.
David and I have already begun working on our follow up to Out of Nothing. It doesn’t have a title yet, but will be about exploration, nature and the spirit of adventure. It will be set simultaneously in the Neolithic, the early 20th century and 200 years into the future. It’s going to be incredible and beautiful. I can’t wait to read it.
Finally, I’m also beginning work on a project about human migration.

Out of Nothing by Daniel Locke with David Blandy, and an introduction by Dr Adam Rutherford, is out now, published by Nobrow. You can buy a copy here. 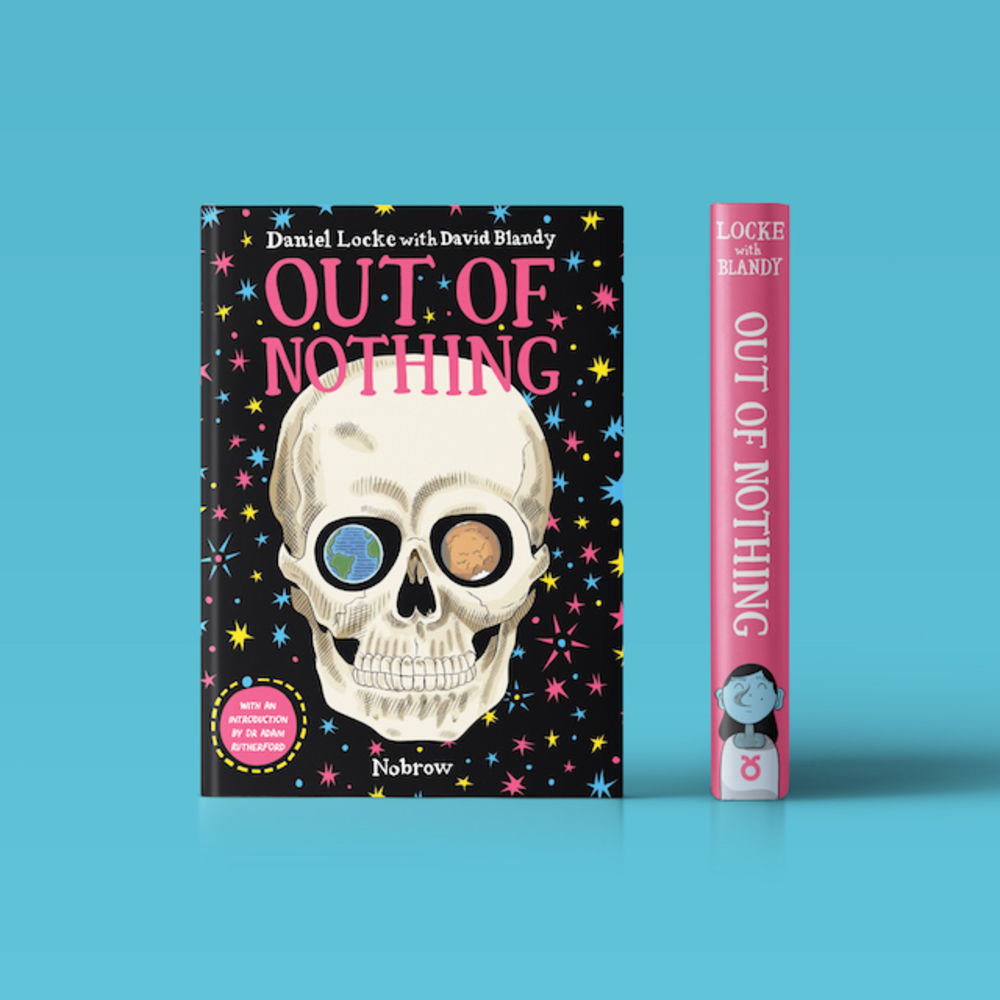